Inspired by another Beck video masterpiece and a record setting Calcutta pool, the field arrived at Shanghai West ready to rumble in the excellent fall golf conditions.  The result was the tightest result in Hairy Crab history with a 4-way tie for first and the entire field lying within six strokes of the lead.

Peter Grant became the first Clam champion in Crab history winning the inaugural Clam Stableford by 7 from massive Steve Parker.  Unfortunately, Grant's tournament would be cut short later that evening in a Long Bar dancing incident with Loco and Looram.

The field retired to Mexico Lindo's to fuel the fires for Saturday's round. 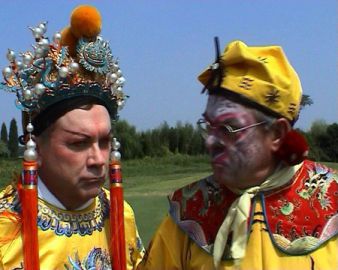 Traditonally the toughest day to the Crab, Saturday's alternate shot at Qi Zhong was no exception.   Dodds/Varconie faded early with a front nine net 45, only to be tied at 157 by Airdrie/Lomason who holed a 40 footer to save an 11 on #17.   Other casualties included Jared/Blackwood, and first day leaders Watkins/Looram and Wentling/O'Connell.

At the front of the pack, Moose/Messner took control with an outstanding 68 for 137.  The inlaw/outlaw team of Karlsson/Wellins shot a dazzling 69 tying Farmer/Mulligan for second at 140.  The rest of the field maintained contact and stayed in the hunt for the big Crab payoff.

In Clam action, Mike Plaspohl bested a wobbly field by 10 while his playing partners set records for beer consumed down the stretch.

The evening was remarkably injury-free despite mass quantities of sushi and saki at Xin Le Lu Sushi.

Excellent fall weather greeted the players for the third and final round at Tianma.  Jared/Blackwood charged from the back to record the best modified Stableford of the day at -22.  This earned them a tie for 6th in the money with Companion/Hamilton, Cornelius/Newcomb and Marsh/Duffy.  As darkness fell, no serious challenge had arisen to the championship team of Moose/Messner.  Beck/Falconer and McCann/Tatelbaum shared joint 2nd while the surprising Farmer/Mulligan shared 4th with Burkett/Ryan. 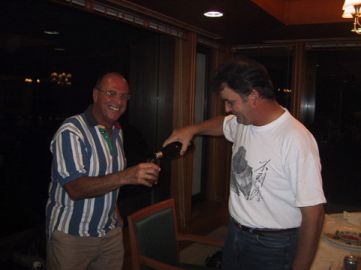 At the back of the pack, Airdrie/Lomason nailed a forty footer for the second straight day.  This time it was for a net eagle that sealed the fate of Dodds/Varconie for DFL.

The field retired to the hospitality of Tianma's dining room to celebrate the victors and divide the spoils.

The Hairy Crab Invitational thanks the following 2003 contributors....

Thanks to you all !

Contact our Charity Coordinator, Joey T to discuss how you can help.